Amaury Coeytaux violin has been an Associate Artist of the Fondation Singer-Polignac from 2010 to 2012. 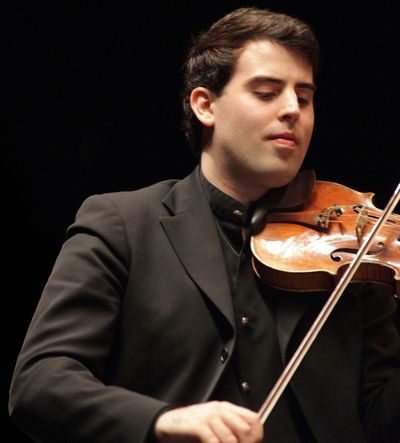 Hailed by The Strad as an “exceptionally sensitive and poetic” musician, French violinist Amaury Coeytaux has won universal praise for his profound interpretations of artistic grace and sensibility. Established as a soloist, chamber musician, and concertmaster, Mr. Coeytaux has conquered a unique niche as one of the most multi-talented and versatile artists across the globe. Winner of the 2006 Rodolfo Lipizer Competition in Italy, Mr. Coeytaux soared to international acclaim after clinching the coveted First Prize as well as 6 special prizes for his outstanding performances. Throughout his career, he has established an impressive record of competition awards, including the 2007-2008 Eisenberg-Fried Prize for the best performance of a concerto, the 2002 Musee Bonnat Prize for the best chamber music performance at the Maurice Ravel Academy, and top prizes at the 2004 Julius Stulberg International String Competition, the 2004 Rosalind & Joseph Stone Berg Philharmonic Competition, the 2004 Waldo Mayo Violin Competition, and the 1997 Royaume de la Musique Competition. As a result of his superior musicianship and talent, Mr. Coeytaux has been awarded prestigious scholarships from the Banque Populaire-Natexis program, the ADAMI Foundation, and the Manhattan School of Music. He is currently an Associated Artist with the Singer-Polignac Foundation.

In 2004, Mr. Coeytaux made his Carnegie Hall debut playing the Brahms Violin Concerto under the direction of David Gilbert in Stern Auditorium. Following his public success, he has been invited to perform extensively around the world, giving concerts in France, Spain, Ukraine, Bulgaria, Germany, Italy, Switzerland, Austria, Canada, the United States, the Dominican Republic, South Korea, Japan, and Taiwan. In constant demand as a recitalist and concerto soloist, Mr. Coeytaux has performed concertos with the philharmonic orchestras of Rome, Ukraine, and Romania, as well as the Toulouse National Orchestra, and has given full-length recitals in Carnegie Hall and the Kennedy Center. He has been featured on the CBC Radio of Ottawa, Radio France’s France Musique channel, and France’s leading TV station, TF1.

During the 2012-2013 season, Mr. Coeytaux was invited to perform and record the world premiere of Pierre Wissmer’s Violin Concerto with the Kiev Philharmonic Orchestra under the direction of Fabrice Gregorutti. This recording forms the final installment of the integral recording of Wissmer’s complete works and will be released by Naxos.

In 2008, Mr. Coeytaux was appointed super-soloist of the Orchestre d’Auvergne. There, he gained the unanimous confidence of the musicians and artistic director Arie van Beek, leading the orchestra through four successful concert seasons. On many occasions, he directed the orchestra in concerts without a conductor and also took on the dual role as soloist and conductor for performances of Bach, Vivaldi, Haydn, and Mendelssohn concertos. In 2013, he was invited to conduct and perform as concerto soloist with the Orchestre de Picardie.

Amaury Coeytaux began studying the violin at a young age and made his first public appearance with an orchestra at age 9. At age 11, he was featured live on Radio France playing Eugène Ysaÿe’s Ballade no. 3 and entered the Conservatoire National Superieur de Musique de Paris two years later. After graduating with the highest honors, he went on to pursue graduate studies at the Manhattan School of Music as a full-scholarship recipient, where he was awarded a Masters degree in 2005 and the prestigious Artist Diploma in 2008. His principal teachers have included Micheline Lefebvre, Jean-Jacques Kantorow, Patinka Kopec, and Pinchas Zukerman.

In 2012, Mr. Coeytaux was appointed super-soloist of the Orchestre Philharmonique de Radio France.