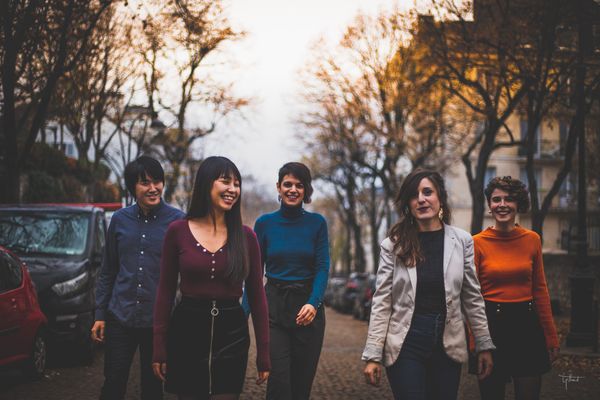 has been in residency since July 2021

The Ensemble Rayuela was founded in 2017 at the Conservatoire National Supérieur de Musique et de Danse de Paris. This project is enriched by the influences of different cultures (Japanese, Italian and Spanish), the curiosity of exploring different music styles, and thecollaboration with other instruments.

Despite its recent foundation, Ensemble Rayuela has already had the opportunity to perform at the Philharmonie de Paris (Grand Salle Pierre Boulez) for the season "Prelude au Concert" , "Automne Musical du Grand Chatellerault", in the European Festival "Jeunes talents" in the Hôtel de Soubise for the 2017/2018 season, and at the XVIII World Saxophone Congress in Zagreb.

They won the First prize and the Jury’s prize at the 91st edition of the Leopold Bellan International Competition for chamber music. They are supported by Société Générale Mécénat Musical and Collège Contemporain. Ensemble Rayuela are JLV Sound, D'Addario and Selmer artists.

In 2019 they record their first CD "Tableaux".
They get the Chamber Music Masters as a saxophone quartet, studying under the direction of professor David Walter at the CNSMDP.