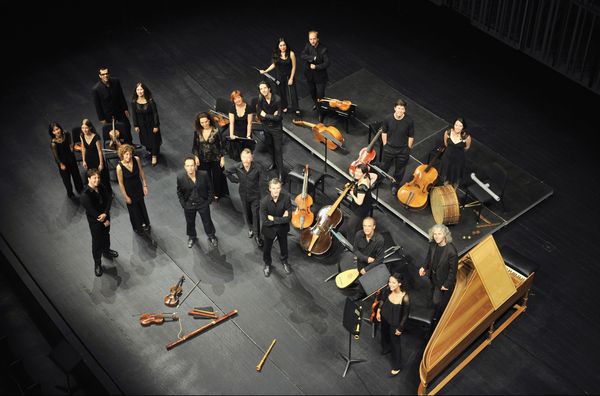 Le Poème Harmonique has been appointed Associate Artist of the Fondation Singer-Polignac in 2012.


Formed in 1998, Le Poème Harmonique is a group of soloists, gathered around its artistic director Vincent Dumestre. Its artistic activity, centred on vocal and instrumental music of the seventeenth and early eighteenth century, is regularly enriched by interaction with other disciplines. This, together with real teamwork – working together as a company – is Le Poème Harmonique’s hallmark in Baroque performance today.

Actors, dancers, circus artists and puppeteers join its singers and musicians in programmes of chamber works – Le Ballet des Fées, Il Fasolo – and, since 2004, in large-scale stage productions, such as Le Bourgeois Gentilhomme (a comédie-ballet by Molière and Lully; stage director Benjamin Lazar) and Baroque Carnival (directed by Cécile Roussat). For operatic performances, such as Lully’s Cadmus et Hermione and Cavalli’s Egisto (both staged by Benjamin Lazar), Le Poème Harmonique studies in depth the correspondences between ‘period’ aesthetics – use of candles for lighting, authentic gestures and painted sets and machinery – and the aesthetics of modern stage productions. The ensemble also gets back to the sources of early French and Italian music by exploring its relationships with traditional or folk music. The recording entitled Aux Marches du Palais, for instance, is devoted to French songs of oral tradition.

Twenty-five per cent of Le Poème Harmonique’s activity takes place in the Haute-Normandie Region. But since it was founded the ensemble has made many concert tours in Europe and has appeared in most of the continent’s capitals, with recent debuts including London, Vienna and Madrid. It has a particularly strong rapport with audiences in Rome, New York and Tokyo.

Outstanding events of the past seasons include Le Bourgeois Gentilhomme, Baroque Carnival and Cadmus et Hermione, all of which have been exceptionally successful, with almost 130 performances, at venues including the Opéra Comique, Théâtre des Champs-Elysées and Cité de la Musique in Paris, the Opéra de Rouen Haute-Normandie, Théâtre de Caen, Grand Théâtre de Provence at Aix-en-Provence, Grand Théâtre de Luxembourg, the Utrecht Festival, Teatro Canal in Madrid, Teatro San Carlo in Naples, the National Theatre in Prague, the Budapest Spring Festival, San Francisco Cal Performances Festival, and so on.

The ensemble’s recent stage projects have included the first performances of Pagliardi’s Caligula, in September 2011 at the International Puppet Festival in Charleville-Mézières, and of Cavalli’s Egisto, in February 2012 at the Opéra-Comique in Paris, then at the Opéra de Rouen Haute-Normandie. Also, in 2013-2014, as part of its residency there, Le Poème Harmonique will be presenting Purcell’s Dido and Æneas at Rouen Opéra.

Le Poème Harmonique is in residency at the Rouen Haute-Normandie Opera.