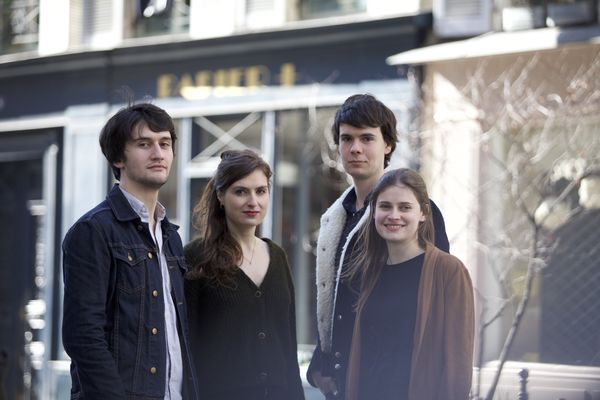 has been in residency since January 2016.

Le Consort is a unique chamber music ensemble bringing together four young musicians who interpret the trio sonata repertoire with enthusiasm, sincerity, and modernity. From Corelli to Vivaldi, from Purcell to Couperin, the dialogue between the two violins and the basso continuo displays rich contrasts between vocal qualities, sensuality, and virtuosity. Le Consort takes possession of the genre, which represents the quintessence of Baroque chamber music, and gives it personal, dynamic, and colourful interpretations. For this coming season, Le Consort will be in residence at la Banque de France as well as at the Abbaye de Royaumont.

In June 2017, Le Consort won First Prize and the Audience Prize at the Loire Valley International Early Music Competition, whose jury president is William Christie. The ensemble has played in Paris (Salle Cortot, the Louvre Auditorium), at the Dijon Opera, at the Easter Festival in Deauville, at the Arsenal in Metz, at the MA Festival in Bruges, at the Sablé Festival, at the Pau Casals Foundation, at deSingel in Antwerp, at the Misteria Paschalia Festival in Kraków, among many other venues. The ensemble has also often been featured on the France 3 television network, as well as on the France Musique and Radio Classique national radio stations. Le Consort works regularly with internationally famous musicians such as William Christie, Mathias Vidal, and Véronique Gens.

From the outset, the musicians of Le Consort fell head over heels for Jean-François Dandrieu’s unrecorded sonatas, which offer an extraordinary variety of sentiments. The ensemble’s disc Opus 1 (awarded a “Diapason d’or” de l'année) offers the entire set of them for the first time. Le Consort also relishes the vocal repertoire and works closely with the mezzo-soprano Eva Zaïcik. With Zaïcik, they have recorded a programme of French cantatas, Venez chère ombre, which appeared in January 2019 at Alpha Classics and was unanimously praised by critics (CHOC Classica, “Choix” of France Musique, Télérama, Libération, Le Figaro, etc.). The ensemble has also made a third recording: 7 Particules (B Records, November 2018), which presents works by Vivaldi, Händel, and Telemann, as well as a contemporary creation by the composer David Chalmin.